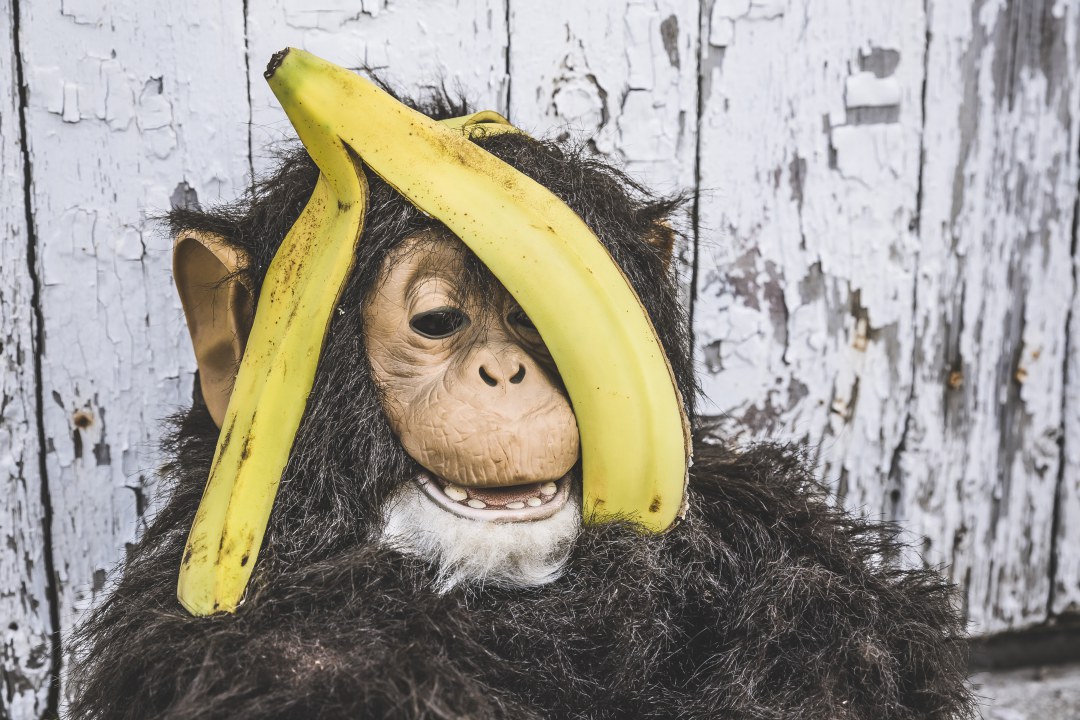 That is the message that I hear a lot in my industry. If you’ve listened to the news over the past few years, you know that the healthcare industry is changing significantly, and as a healthcare CIO, I see change almost every day. One of the most impactful changes that I have head to deal with in the past few years has been the use of electronic medical records, connected devices and digital communication. It’s moving ahead at breakneck speed and the choice to avoid it is quickly fading. The choice is to use technology, or lose money. Simple.

Whether it’s government regulation, customer requests, new competitors to your business, or just new opportunities at home, everyone will face change and have to deal with it. And it will continue to happen more quickly than it ever has before. The pace of of the pace of change is changing!

John P. Kotter, seen by many as the father of change management, would tell you that change is not only inevitable, it’s necessary. In his book ‘Leading Change‘, he said that the rate of chance is only going to speed up over time. It can’t be avoided.

But, change can be made a bit easier if you know how to handle it. The problem is, often times, people can’t even articulate why they don’t want to change, they just know how it makes them feel, and they know that things seemed fine in the past. But as a leader, we know that change can mean improvement and better productivity.

The rate of change is not going to slow down anytime soon. If anything, competition in most industries will probably speed up even more in the next few decades.

One of my favorite stories about this was one I heard many years ago from a mentor, and it stuck with me over the years. I can’t validate that this was a real experiment, but the lesson is a great one.

There was an experiment conducted with five monkeys in a cage to see if the researchers could understand the power of culture on change. In the cage, a bunch of bananas were hung out of reach of the monkeys, and boxes were placed in the cage with them. The monkeys immediately began to stack the boxes up to reach the bananas, but every time they got close, they were hosed down with cold water and the boxes were scattered. Eventually, after multiple sprays of cold water, the monkeys gave up on trying to get to the bananas.

With that result, the researchers began to methodically change out the original monkeys one at a time until all the monkeys in the cage were not part of that first group. Even though every monkey in the cage was new, they still didn’t try to reach for the bananas.

Culture is a powerful thing. Just like in the experiment with the monkeys, the culture of an organization often drives the behavior of the team, and in many cases, they can’t articulate why they do things the way they do, or why change seems so difficult. It is inherent in the culture, and anything that changes this only serves to disrupt their comfort. The knowledge is tacit, and often unexplainable.

While there are many folks who enjoy change, and even relish new experiences and challenges, my experience tells me that there are more who would prefer things didn’t change. Sometimes I am just as guilty as anyone. For the life of me, I can never figure out why products that I love always end up going away, or changing.

However, it’s the more significant changes in people’s lives that really seem to have the most impact. Jobs change, illness strikes, or relationships fall apart. These are the changes that are most difficult to deal with.

So, as a leader, how can you help your team manage through change, and come out on the other side with the view that things actually improved? Here are four steps, and they need to be followed in order, that will lessen the effect of a change on your team, organization or family.

Explain – Don’t tell. I’m not advocating that every change needs to have the approval of your team. You were put in the leadership role to make decisions for the good of the organization, and you likely have more insight into the reasons the change was necessary. However, explaining the reason for a change is the first step in gaining acceptance. Explain the rationale, tell them what sources of information you used, and describe the decision process that you went through. Often times, people can put themselves ‘in your shoes’ a lot easier, and they will come to the same conclusions you did.

Engage – By keeping the people affected by the change up to date and involved in the change, you are building some ownership in the new state. By allowing them to be your advisor on how to deal with the change, and engaging them in some of the key aspects of the change, people tend to embrace and take personal ownership. The worst thing you can do is to tell people about a future change, but then go silent until the day it’s time to execute. They’ve been in the dark, and that is a recipe for dissatisfaction.

[bctt tweet=”The worst thing you can do is to tell people about a future change, but then go silent until the day it’s time to execute”]

Employ – When it’s time to actually implement a change, give up the controls and let your team make it happen. If you’ve been engaging them along the way, and they have some sense of ownership of the change, you want them to feel like they will get the ‘credit’ when it goes well. Use them to communicate and become the champion of the change, and allow them the opportunity to gain some visibility with the organization. They will gain a sense of accomplishment, and others will likely see this and want to be more involved in any future changes.

Exclaim– (ok…I’m stretching here to get my 4th ‘E’) When the change has taken place, it’s not time to take credit for the improvement. You have to quickly tell others about what a great job the team did, and celebrate the efforts of your champions. Everyone loves to hear their own name, and certainly loves to be recognized for hard work. Take time to celebrate and highlight the accomplishment that the team worked on together, and the next change will be just a bit easier.

In the end, you will likely be able to show them that they are in a better place than they were before.

But I don’t want to imply that this will be all butterflies and candy canes. Sometimes, people experience the same emotions as someone who has lost a loved one. The emotions are high, and the feelings are real.

In 1969, Elisabeth Kubler-Ross came up with the “Change Curve” to describe how people deal with the news that they are going to die from a terminal illness. In her experience, people went through a wave of emotions that started with Denial, worked through Anger and eventually ended up with an Acceptance of where they are.

Modified slightly for a less somber reason, Main Event Management developed a similar change curve as part of their “Model-Netics” program that starts with the current equilibrium, goes through the “valley of despair” and works its way up to the new equilibrium and, hopefully, new levels of productivity. That is how change tends to affect organizations, and is what you will typically experience as a leader with your team. The trick is to get the team through the “valley of despair” as quickly as possible so they can reach the new state. 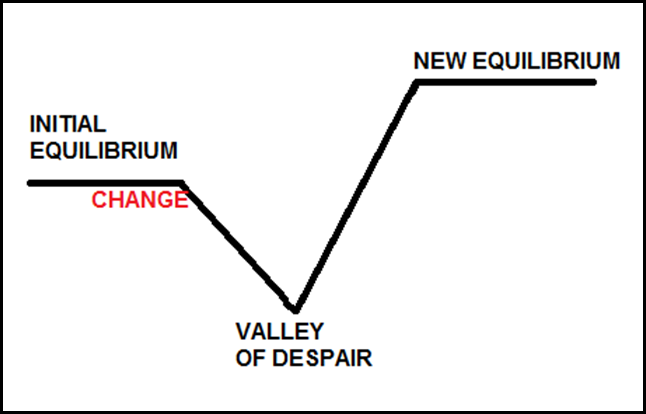 As I have heard it said, “you can’t skip the dip”, and the valley of despair is an inevitable part of change for a person, or a team. The goal is to help them push through as quickly as possible, and get themselves to a new place, and hopefully a higher level of productivity. Remember to Explain, Engage, Employ and Exclaim, and you might make the change just a little easier.

What is something that you wanted to change, but received pushback and despair from the folks that were impacted? How did you deal with the change and get them on board?