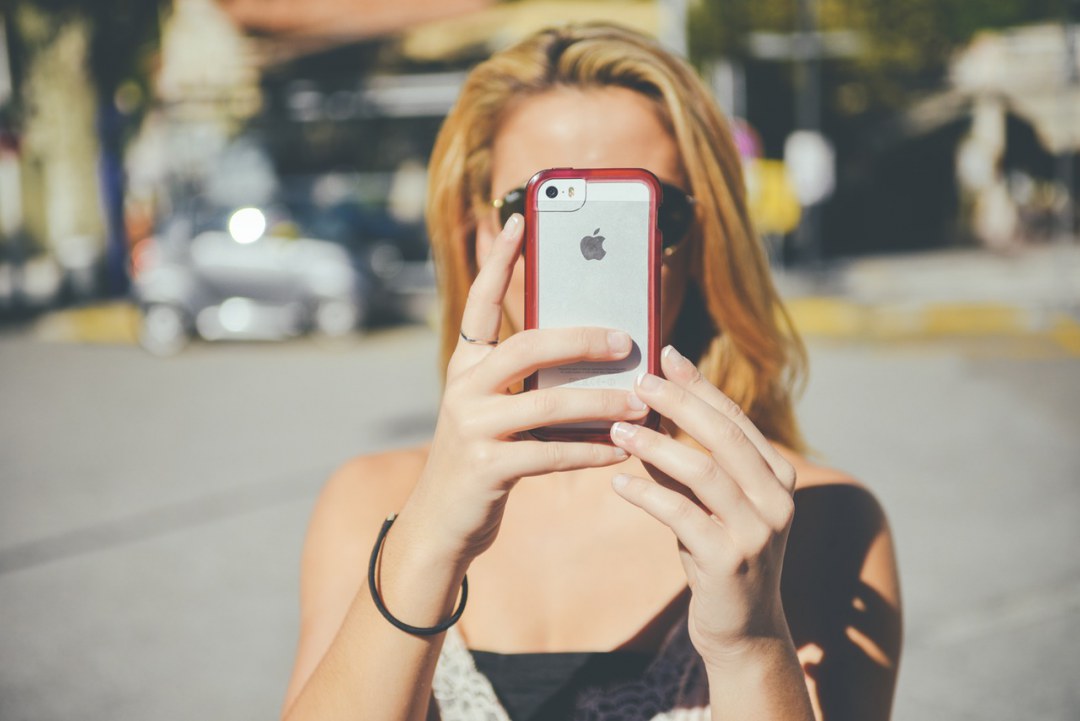 The other night, I was in line at a favorite restaurant waiting to order and watched a young lady (probably high school age) in the line in front of me take at least 10 ‘selfies’ in a matter of 5 minutes as she waited to order her food. She was relentless, taking a variety of photos at different angles, different directions, all the time going from a straight face to an amazing, yet obviously fake smile. She was with a young man, probably a date, but would stop her conversation with him to pose for the camera on regular, and somewhat awkward moments.

The process was the same each time. She would raise her phone up, check her hair and surroundings, and suddenly turn on a perfect smile before she clicked the button. As soon as the picture was taken, her face went deadpan, and she was back to her normal affect. It was actually quite interesting to watch how quickly she could set up the perfect picture and face, and then return to her ‘normal’ self.

Now, in case you think this is just a rant about the self-obsessed, narcissistic younger generation, let me assure you it’s not. In fact, watching the young lady that day made me think of some of the issues we face as leaders. Faced with an organization that is constantly watching every move we make, ever word we utter, and every decision that goes wrong, we can become obsessed in making sure we control what people see and feel. We spend as much time as possible making sure that we give the right impression to the organization.

Just like this young lady who was obsessed in making sure that what people saw was only the best part of her, and giving the impression that she had everything together, we fret over the persona we portray.

It’s easy to see why the young lady obsesses so much with her selfies, and makes sure each one is perfect. According to research, there are an estimated one million selfies taken every day across the globe, pretty evenly distributed between men and women. For people between the ages of 18 and 24, nearly 1/3 of ALL the photos taken by them are selfies! And with this self obsession comes some disturbing trends. Around 50% of 18-24 year olds have admitted to taking a selfie while driving, and the prevalence of Body Dysmorphic Disorder (BDD), while affecting a small percentage of the population, is exacerbated by the abundance of selfies being taken. Self obsessed, you bet!

Yet, despite all the negatives about selfies, what can’t be overlooked is the power that social media, and selfies hold. For example, in 2014, a United Kingdom Cancer Research organization launched a ‘selfie campaign’ called “No Makeup Selfie”. During this campaign, women posted selfies of themselves without makeup across the globe. That campaign doubled the number of searches for cancer awareness during that month, and the organization grossed $12.5 million in contributions. Self obsession actually does pay sometimes!

As I watched the young lady fret over her image, I could only imagine how we must look sometimes to those we lead. We can easily become self obsessed, worrying about every word choice, wardrobe decision and and our worth to the organization. Just like that young lady, we grow more deeply focused on our ‘leader selfie’ than we do actually leading and moving the organization ahead. In some ways, we’ve developed our own version of BDD, which you could call ‘Leadership Dysmorphic Disorder’ (LDD).

LDD could be characterized by an overarching concern with how you come across to your organization. Whether it’s making sure you say the ‘right’ things, get to know the ‘right’ people or even making sure that your office projects the right image as a leader, you may have developed LDD. This can go so far as to make sure that your chair is always sitting higher than the people you meet with in your office, or displaying all the correct credentials on your wall to ensure that people know you have the necessary skills and education to hold the position. Of course, none of this is wrong on its face, but when it becomes more important than the relationships you develop, you might have crossed over into LDD. When you cross that line, you will find yourself emotionally isolated and extremely distrustful to those around you. And, the slightest perceived injustice will likely cause you to get angry quickly.

What if you’re not sure if you have LDD? What can you do to find out before you go and make any changes to your style? Here are a few things to look for that might be a sign you are suffering from LDD and need to make some changes:

If you’ve found yourself with your own version of LDD, it’s time to start being yourself again. In fact, just being yourself as a leader has a number of benefits that will ultimately make you better at what you do, improve the morale of the team, and even improve employee engagement. Here are just a few of the benefits of being your genuine self:

If you find yourself taking virtual ‘selfies’ in front of your organization, its important you find out why, and then work to make changes. No one, especially your team, is served by you putting on your best face at all times. People want to work for leaders who are genuine in their behaviors, honest in their relationships and focused on the good over everyone. No one likes to work for a self-centered leader. Ultimately, being yourself is what you owe your team and your organization. No one is well served when the real you isn’t present.

Do you find yourself worrying more about how you say things, how you look, or how you project yourself than you team? Do you suffer from LDD? If so, what can you do to change this?

Tags
Influence
Leadership
← PREVIOUS POST
So You Want To Sell To The CIO?
NEXT POST →
How To Stop Your Email From Killing You